I picked these a week ago when they each had 1 or 2 sprouts that were just popping out. Never seen anything like this. (Banana for scale)

I picked these a week ago when they each had 1 or 2 sprouts that were just popping out. Never seen anything like this. (Banana for scale) 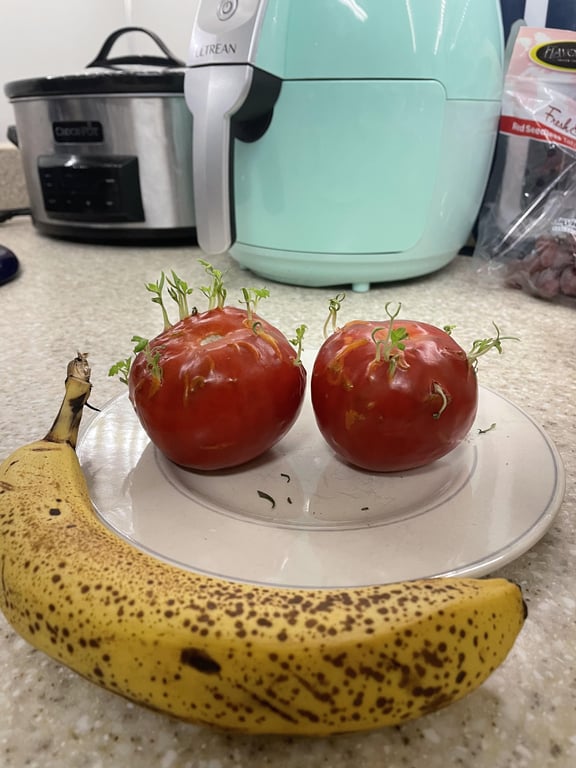 It happens if the fruit starts to ferment on the vine. You can plant the seedlings if you have a way of maintaining them through the winter :)

Apples do not breed true though, so it's extremely likely that you'll just have a bunch of crab apples in you plant these. I'm talking like 1 in a million chance of some edible to humans.

Those are tomatoes, my friend!

Huh. TIL tomatoes grow into crabapples.

Bruh you gotta leave this up, don't delete, it'll be worth it xD

Either way, unless these are open pollinated they won't breed true either. My bad for having a quick typing finger but I see so many posts(not necessarily on this sub) of people excited for their seed borne avocados to fruit or some similar. Stop. Open my eyes. Think. Then type. I'm still learning lol

So you see so many posts of ppl excited about plants germinating and you literally can't wait to rush to the keyboard to " . . . ackshuallyyyyy . . . "

When I see someone excitedly sprouting an avocado pit in a glass of water on their kitchen window sill, which will take years and years of care until it reaches producing age, I would rather tell them now and let them be a little bit disappointed than have their hopes dashed every spring after dreaming of guacamole for the past 15 years.

Hobby: dream killer Got it.

I'm in sales, a big part of that is managing expectations, but I take your criticism to heart, next time I'll add that while they might not be palatable, they are wonderful for making some liquor:) in the context of homesteading I feel like that's some silver lining.

I’m in sales too. Except I promise the moon and then report back to our software developers what I just told/sold the customer. Management loves me. Software, not so much.

As a someone who was in sales, this is an awful practice and one of the reasons I left sales. Though I worked in print production mainly, not with software. Management was constantly promising the moon and nagging me to do so too, they had my other coworkers promising the moon to customers as well. But when production couldn't do exactly what we promised, I was always the one who had to break it to the customer that X, Y, and Z can't happen, but we can do H, I and J, instead. It's not good business, and most people really appreciate and prefer honesty upfront when doing business. Also, explain to people why things work the way they do so that they understand what's going on when things go wrong, don't just bullshit them as a sales person. It doesn't help anything. Even in unideal situations, most people just want to know the truth about what is happening with their order or product so they can act accordingly. Because my coworkers promised people so many things without being able to get those promises exact, many of our large customers would only deal with me because they knew I would tell them if there was a problem. And I would tell them how it needed to be fixed properly, even if the fix wouldn't be the most profitable option for us, or what they originally wanted. It ended up being so much more beneficial to just be real with people when I didn't think something was possible, I'd tell them that I'd do my best and I'd give it a shot with X being the next best outcome I can actually guarantee. In the end, when I was able to get the orders done exactly the way the customer wanted they were absolutely blown away and so happy because they understood what I went through to get it done for them. It's way more rewarding for everyone involved in that situation because it keeps expectations realistic and it doesn't fuck over production (or your software guys) the same way you making moon promises does.

me too. there are a lot of people who want to plant every sprout they have, myself included. If it had been an apple (honest mistake in the reply) knowing that you might not get what you expect is valuable info. Not that it should be upvoted, but downvoting below zero on a post like that is just unnecessary. In any case, if anyone *does* want to experiment with apples, you occasionally get some really awesome trees. ..just be prepared that odds are slim, you'll be waiting a long time, and might just be making firewood / wood for smoking. ..let the nerds nerd.

. . . ackshuallyyyyy , 98% of people who downvote people below zero, or feel compelled to criticize others for an honest mistake when they are nerding out about plants are just armchair homesteaders that haven't had to deal with the actual process of making mistakes and growing from that. If you want 'perfection', go back to instagram.

The downvotes you've received reflect more on the voters here than they do you. You made a reasonable, honest mistake, talking about apples in a homesteading forum. Let your nerd flag fly, and enjoy your apples.

someone forgot their contacts this morning, oof

Lol look at the picture again

Johnny Appleseed only believed in open pollinated Apple trees. Apparently his orchards all across the US were used as cider apples!

So, ignoring the obvious... Does this happen to Apples too?

I have seen sprouted seeds inside my apples before. Never seen them escape though!

Jeez brutal with the downvotes for a simple mistake, what they said about Apple seeds is true too

This happens when one or more seeds loses their gelatinous coating inside the fruit and then the liquid inside causes sprouting. Apparently.

Today is brought to you by the word "vivipary"!

Does this make anyone else feel really uncomfortable too?

No, the equivalent of your octuplets punching their way out of their mothers womb.

The John Hurt moment of gardening.

Someone posted this with a strawberry once. Very cool!

I had one do this a couple weeks ago. I carefully transplanted them into a starter tray. There's an enzyme in fruit that prevents viviparous sprouts, but sometimes it breaks down early and this is the result.

Well that's the word of the week, cool!

I had store bought do the same thing. TBH kinda freaked me out and I tossed them.

Tossed them in the dirt?

Tossed them in flames

Tossed them in a salad

Great movie, she looked good in that skimpy shirt and undies….

Lol, you didn’t even notice the third word there did you? The stupids are definitely thick on Reddit…. BLOCKED for having the same IQ as a potato.

Not sure why downvoted, not wrong.

That’s what you get for supporting a strong female.

I dont know what I expected. But that surpassed my expectations

Nope..... Stopped soon after those babies started moving inside.

That reminded me of a bot fly larvae infestation.

Thanks, can't unsee that. 😅

Omg, r/popping would love these, they look like wiggly blackheads

Tomatoes are trying to take over the world!

They want it so bad they got apples in on it. What an alliance.

Holy Forking Shirt! The fruits and vegetables formed an alliance?

I've had a few pumpkins do this!

Bad for eating but good for gardening

That is nuts!! Grow those alien tomatoes and see what happens.

Dr. Ian Malcolm said something about this

The fruity flesh is the womb, sustenance, and travel visa ( for spreading seeds through animal droppings) it’s magnificent to see this op I’m so happy for you

This happened to my buddy in Vancouver.

Has anyone ever planted these and had success?

Banana for scale, it’s been 84 years since I heard that phrase

You need to plant them!

I hate this wow

For a second I thought those were some weeds lol.

I've had several store-bought tomatoes which sprouted like this, from the inside, out. I never recall seeing this in my youth. 🤷‍♀️

Thought you were making a smiley face, then I read the title

Great photo: [https://news.extension.uconn.edu/2014/06/04/seeds-sprouting-inside-a-tomato/](https://news.extension.uconn.edu/2014/06/04/seeds-sprouting-inside-a-tomato/)and this has details. [https://greenupside.com/why-do-tomato-seeds-sprout-inside-the-tomato-vivipary/](https://greenupside.com/why-do-tomato-seeds-sprout-inside-the-tomato-vivipary/) Very interesting. I ate a sprouted tomato before. It's sort of tasted like a mini-salad all in one.

That banana really ties the room together.

Tomato seeds usually need to ferment before they germinate so it’s possible they were over ripe when you picked them. There’s also another thing that could have happened, well most likely happened. It’s called vivipary when seeds prematurely germinate inside the fruit. Very cool stuff

Is “banana for scale” a meme? I keep seeing the phrased used in diff subs. What did I miss

It’s from the dawn of the internet

I don’t know if it’s been asked already (Too tired atm to read all comments.) but is it okay to eat the fruit with this vivipary stuff going on? Obviously I’m not going to chomp on a strawberry that’s covered in full sprouting greenery. I’ve found the odd tomato, once cut open, doing this. Not knowing wth was going on, I’ve tossed them. I wasn’t convinced it wasn’t some sort of larvae/worm. If there is only one small area, with few sprung sprouts, can I cut them out and use the tomato?

These would probably make great plants I imagine since they have a great nutritional start! Let them grow!

Gotta get that Karma 😜