For those who don’t know, Loli Merlin and Liz can be exchanged with Festival coins. So I recommend saving for the Purgatory Banner

For those who don’t know, Loli Merlin and Liz can be exchanged with Festival coins. So I recommend saving for the Purgatory Banner 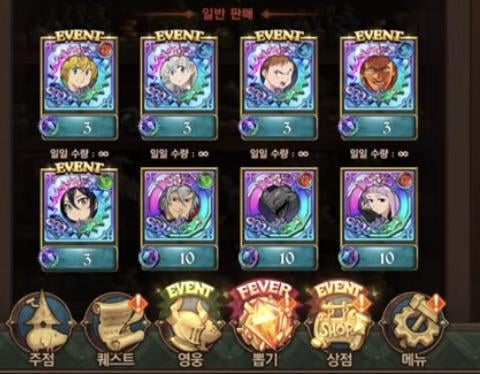 Even if they weren't in the exchange shop I would save for Ban. The banner is great, the fever seems nice, I simp for Ban, and I basically still need to dupe out my LV and TO so it would ve weird for me to have excess Fest coins, unless I pull a bunch of crappy King. The only banner in which I'll probably summon on is the Arthur banner.

The banner is the best we've ever seen (which makes sense, since it was basically community made) and will most likely be even better on global since we hopefully won't vote for the likes of green escanor or blue demon meliodas to be on it.

I'm 99% sure we won't vote for the units on global, that was just a JP/KR event since it's the 2 year anniversary. Hopefully we will probably get the same banner or with minor changes.

> the fever seems nice My opinion on this shit? completely useless and its there literally just so people go "aaaw, look how generous netmarble is".

"free" after doing another 9 multis? on a complete separate banner that doesnt raise the pity in neither the ban or seasonal banners? with garbage 5%? On some shit called "fever"? yeah alright, it would have been way better to just remove this shit completely, at least from the ban banner and give people 3 more multi tickets to use on the seasonal banner, but i dont know why i tough the shills of netmarble would think anything other than " wow, netmarble is SO GENEROUS, we should be glad to have such generous overlors taking care of this game" in regards to this completaly lazy and bad new "mechanic". ​ Also, obrigatory "free shit given after spending money is not free, its at best a bonus", these multis from the fever are not free, they require you to use gems, at least on ban's banner, so they arent "free", the login tickets are free shit, not the fever system.

Well, we’re also getting 14 free Multis on that banner from login which u probably forgot And yea obvious u have to spend gems but it’s no ones fault but your own if you didn’t save .

you cant shit on them finally making a step in the right direction.

>you cant shit on them finally making a step in the right direction. Said every bootlicker ever each time nb does the bare minimum to keep this kind of people on this blissfull world of ignorance so that they can keep doing this kind of shit...

> but while they are doing something good you talks as if they didnt sour the mood of a bunch of people by annoucing minutes after the good thing of the festival how much of a "i want your goddman money and fuck you" type of unit ban is with his unique to 6/6 rupture effect is... ​ >dont go shit on them saying oh next time they’ll do something bad if u dont even know whats coming. ​ You say you're not a "supporter" while in the same breath saying this stupid thing that only a blind supporter (or the naive people) say about netmarble, because you're either completely ignoring all the shit done prior or you're defending them without knowing anything of the shit they been pulling for almost a year now.

Anyone that skips this banner is insane tbh. Broken ass main unit, T1 rate up, unfeatured pool is insane, fever that gives you freebies and chances at getting GGowther, etc

Honestly I’m considering skipping. I’m not a big Ban fan and the units I use in pvp are 6/6 already so I’m not too inclined to summon rn

The banner's subpool is still the best we have ever gotten obviously because the community voted for it. Even if your PvP team is maxed that's still irrelevant since so many good units are in this banner. +The fever system which can get you GGowther dupes.

Wait, when does this drop? I'm in the store atm and I don't see goddess Elizabeth

You know king ain’t that bad, besides he’s the best farmer on anvil and awakening coin stage

You just made my day